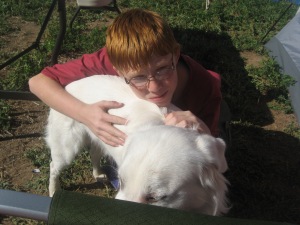 The first time I talked to Alex, he was curled up on a camp chair, trying not to cry. It was February, 2006. We were both part of the SCA and this was our big Estrella War event . That particular day, Alex wasn’t allowed to go to a volunteer pizza party, because of some nonsense. When I asked him what was wrong, he responded with a defensive, “Why do you care?”
“Because,” I said. “You’re my son’s friend and if you’re upset, it bothers me.”
The honest truth is, it took all I had to have this conversation with this 12 year old. I am not the best at dealing with children, who aren’t my own, especially not someone who didn’t want comforting.
From my  Livejournal:

“Meanwhile, Alexander the Great was lying on two camp chairs in the kitchen area looking very sad as his family left for the pizza party. He was grounded because of his attitude.
It felt tense with just him lying in those chairs. We began to talk a little. I also found out he had paid a lot of attention to Moses. He said he thought that Moses had been lonely when he was there. He would whimper when the children in the encampment left. He also talked about how cute he thought it was when Moses would twitch his paws in his sleep.
Soon he was introducing Matt (who had been brought back) and me to his Mastiff, Thor, and his other dog, who kept jumping.”

He became affectionately known as my sixth child, the day I took a playground headcount of my children and accidentally counted him.
He was always part of our lives. He had seen our family’s best and our absolute worst. Even when he was busy, he would suddenly come around, just to remind us he was still there. 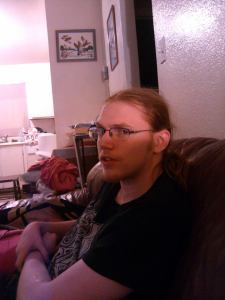 In recent years, he would send me IMs and emails, just to chat. If I needed help with my website or computer, he was at my house within 24 hours. I think we spent more time hanging out, playing music, and having witty conversation, than actually getting anything done, but that was the way things went and he was always fun to have over.

In November, Alex sent me an IM asking if my daughter would like a lucet for her birthday. I answered by telling him I was about to have a nervous breakdown trying to get everything ready for her surprise party.
“I’m eating, right now. I’ll leave in 10 minutes, then I’ll be over in an hour.”
What looked like a daunting task became easier and fun. There was still plenty of music and witty conversation. He was the “keeper of the flame” as he tended the fire pit for the party.  After the party was over, he lingered on, playing games with the kids and my husband. As always, we told him to let us know he got home okay.

This is about where the story has to end. That night, I realized Alex wasn’t just my son’s childhood friend or the “sixth child” of our family. He was my friend. A friend , who would drop everything and help me, whenever I asked. Yet, never bothered to ask anything in return. Our last conversation (via IM)  was about books.  I wanted classic book ideas. He couldn’t think of any fantasy I didn’t know (his favourite) that was before 1960. We also talked about how weird it was to meet anyone that couldn’t talk about music.

Last week, Alex was killed in a motorcycle accident. He did everything right, but was hit by a negligent driver. It’s difficult to not think of his motorcycle sitting in our driveway or him not rolling his eyes about my musical tastes and plugging his phone into my speakers to play classic rock or some obscure band I just “had to hear”.

The lesson here is about fun. Alex made every day fun. He didn’t care if people thought he was weird. He revelled in the thought. He did what he wanted and as long as it hurt no one else, he went with it.

We give ourselves so many obstructions to appear “normal”. But, one of the happiest, most unconditionally loving people I ever met, didn’t care what others thought. He went past those barriers and lived every day to the fullest.

I’ll miss you,  Alex. My dear friend and brother.