Louisa May Alcott’s parents met when Louisa’s mother, Abigail May, was visiting her brother in Boston. While there, she met a young school teacher whose ideas were new and strange for the time. His name was Bronson Alcott. Abigail’s family thought Bronson’s ideas would not be good for raising a family, but Bronson and Abigail married on May 23, 1830 at Kings Chapel, where the May family were members.

After they married, they moved to Philadelphia where their first daughter, Anna, was born. They were living in Germantown, Pennsylvania, when Louisa was born on November 29, 1832, same day as her father’s birthday.

Before Louisa’s second birthday the family moved to Boston for the opening of Bronson’s temple school, which lasted five years. During this time Elizabeth was born in June, 1835, and Abby May five years later.

.Bronson recovered from the failure of his temple school, and started to look for new projects

By this time, the Alcotts were living, for the first of many times, in Concord, Massachusetts. (the two places the family lived most were Concord and Boston.)

Louisa wrote that she never went to school. She was always taught by her father, or sometimes a governess. “Very happy hours they were to us, for my father taught in the wise way which unfolds what lies in the child’s nature as a flower blooms, rather than crammed it, like a Strasbourg goose, with more than it could digest. I never liked arithmetic nor grammar . . . but reading, writing, composition, history, and geography I enjoyed, as well as the stories read to us with a skill peculiarly his own.”

Louisa also had a pillow in the shape of a sausage that would show the family her mood, when it was standing on end it meant she was in a good mood and when it was lying on it’s side she wanted to be left alone.

When Louisa was ten the family (under the influence of some friends of Bronson’s) moved to Harvard, Massachusetts, on a hillside farm that was suppose to be the start of a model community. Fruit lands, using no animal products, or labor, except as Abigail saw for the women. She and her three small daughters struggled to keep house and farm going, while the men roamed the countryside. After a few months, winter and fighting put an end to the experiment. The only thing growing on the “fruit land” were wild oats.

After the family moved back to Concord, they lived across from Ralph Waldo Emerson ‘s family, in a house they called “Hillside”, for the next three years. This happy time inspired the first chapter of Little Women .

Closeness to the Emerson family was important to Louisa. Her first book, Flower Fables, published in 1854 was written for Ellen Emerson who idolized her father. When reading a book about a secret love, Louisa decided she would do the same for Mr. Emerson. She wrote letters to him but never sent them, sat in his cherry tree at midnight until the owls scared her to bed, left wild flowers at his doorstep,and sang outside his window in really bad German. Years later, Louisa told Mr. Emerson about it. He wanted the letters, but they had been burned years before.

Her first story was called “The Revel Painters – A Tale of Rome” . It was written in the Hillside house, in 1848, and published in the Olive Branch.

By this time, the Alcott s were living in Boston. They lived at five different addresses between 1849-1852. Louisa and her older sister ,Anna ,helped with the family income by teaching. Her unhappy few weeks with the Dedham family were put into her essay How I Went to Service. Publisher, James T. Fields rejected it, saying, “Stick to your teaching, Miss Alcott. You can’t write.”She was sad, but would not give up, and kept writing. Slowly, she learned what would sell.

When she was living alone in Boston, she took in some sewing along with being a governess.Living on as little as possible, Louisa sent all her money home.

Despite all of her work, Louisa found time to enjoy the Boston theater and a veteran amateur theater group. Louisa loved the theatre, made some good friends, and wrote for it. One of her plays was accepted for production, but some things went wrong and it never opened. When she lived in Walpole, New Hampshire, between 1855-1857, she put together the Walpole Dramatic Company When she moved back to Concord at the end of 1857 she quickly made the Concord Dramatic Union, which livened up the dull town.

The Alcott family lived in Concord, where they stayed for the next twenty years. There first year was marked by Elizabeth’s death, and Anna ‘s marriage to John Pratt. Bronson Alcott was superintendent of schools.

Louisa spent much of her time in Boston: Writing, Teaching, and sending money home. In 1863, a story she wrote won her a $100 prize. At this time, she was working on two books, Moods and Success. Later published as Work, in 1873.

When the Civil War broke out, Louisa wanted to do her part, “I became an abolitionist at an early age,” she wrote, “My greatest pride is in the fact that I lived to know the brave men and women who did so much for the cause, and that I had a very small share in the war which put an end to a great wrong.” Her “small share” was a month as a nurse in the winter of 1862-63, until pneumonia forced her home.

Louisa’s health was in danger from a high fever and the calomile, (a medicine that makes people throw up.) she was given. After a slow recovery, Louisa wrote three books and spent a year in Europe.

When she returned to Boston, Louisa became the editor of a children’s magazine.

In September 1867, Louisa was asked to write “a book for girls.” It wasn’t until the following May that she could bring herself to do it, and not because she wanted to. She then went into her writing “vortex”. She finished Part One of Little Women in mid July, to be published in the Fall. It was quickly a bestseller and everyone wanted a sequel, so in the following Spring, Part Two came out.

Louisa soon became a victim of her own success. She wanted to do more serious books, but she was stuck writing childrens’, because that is what paid the best.

After twenty years, Louisa reached her goal, of making her family independent. All of their debts were paid, “even if it has cost me my health.,” she wrote. “But I still live. There is more for me to do, I suppose.”

Louisa and her widowed sister bought a house in Concord and moved there mother in a few weeks before her death.

After which Louisa gave her energy to Womens’ Rights. She attended Congress in 1875. She wrote for Lucy Stone’s Woman’s Journal while she was trying to get women to vote in the school elections. Louisa was the first women register to vote.

She still wrote children’s books and published one adult novel, in 1877.

Spending a lot of time in Boston, Louisa lived with her sister, May, as Louisa gave her art lessons.

They traveled together. May became an artist, in London, where she met her husband, who died a few weeks after the of their daughter Lulu (Louisa) was born.After which, May left the child to her sister, Louisa.

In September1880, Lulu arrived in Boston. She gave Louisa’s life a new view. She loved watching Lulu grow. Louisa told stories to her and published them in Lulu’s Library. 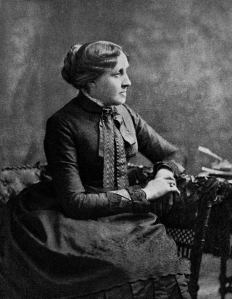 As Louisa’s health was failing, she made a home for Lulu, with Anna, and her sons. She set out to find a cure and soon found there was none.

“ I wish I could.” Louisa replied.

Louisa is buried in Sleepy Hallow Cemetery. Her grave has a Civil War veterans mark.

Which women have inspired you? Tell us about them and we may feature them in a future Inspirational Woman edition of Being Artemis.